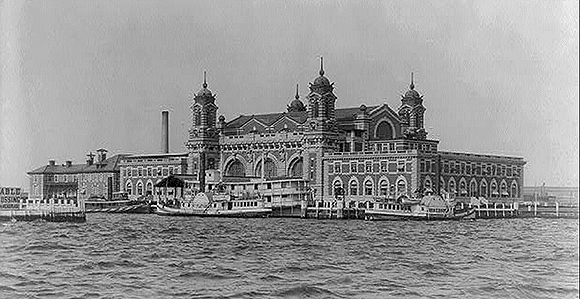 There is a crisis at the southern border of the United States. There has been one sprawling back decades. It is a humanitarian crisis. Almost everyone agrees on that point if not with the addendum “and national security.” Yet while the current administration ponders perplexingly inhuman solutions to human problems, and other politicos spin their wheels, I the ordinary civilian cannot understand why we are not meeting this crisis in the exact same way we have met it before.

The humanitarian crisis is a result of families and unaccompanied children migrating from Central America’s northern triangle of Guatemala, Honduras and El Salvador. These families are reportedly making the dangerous, imprudent journey because they are leaving more dangerous, less prudent environs. Over 76,000 immigrants attempted to enter the country in February alone. This is the highest number people knocking on America’s door in more than a decade, though still well below levels seen 20 years ago. I am probably not telling you anything you do not already know.

In the meantime, our Border Patrol agents are overtaxed, spread too thin and unable to find enough recruits. We have waves of people arriving to claim asylum and decades of political intransigence have left us ill-prepared to deal with the current situation. It is a crisis. It has a human face. And it is not going anywhere.

We’ve seen this face before. Whether it was Irish immigrants fleeing famine in the mid-19th century or Jews fleeing the hell of the Holocaust, we have seen this before. Millions of hardscrabble people struggling to ensure a future for themselves and all their descendants, the endurance of their family name. This country has a long history of welcoming the world’s miserable. Our Statue of Liberty preaches it in perpetuity, despite anything that cold fish fascist Stephen Miller says.

But we should take heart. We have seen this face before, but we have also met this challenge before. No one is saying that 76,000 people a month is expected to repeat for the entire calendar. But even if it does, We’d still be 100,000 short of 1907. In 1907, the United States of America welcomed 1,004,756 new residents. To put that in even more brilliant context, that number exceeded around 1% of the country’s population at the time, compared to 0.3% of today’s.

The reason we were able to welcome over a million immigrants to the Land of the Free was due in large part to one place that could offer us a map forward: Ellis Island. The immigrant inspection station on Ellis Island, just off the coast of Manhattan, opened on New Year’s Day 1892. In its first year, it processed 450,000 new immigrants to the U.S. It operated until 1954, having opened the door of this great country to over 12 million immigrants. Some estimate that over at third of our citizens can trace their lineage to someone processed at Ellis Island.

If we have done this before, why can we not do it again? Why can we not build the Ellis Island of the southern border? I realize two things: 1) the history of Ellis island is not a totally guileless one and 2) there are economic and political concerns about which I have no idea. I’m just the guy on the couch with one eye on cable news and the other on Twitter.

And I realize that there are other complicating factors. One is the smugglers, dubious brokers paid to get people across Mexico and into the United States. I understand it to be an exploitative relationship rife with its own risks, as if the risks of the journey weren’t enough. But you know how to undercut a black market? Legitimize the services. No, one or more formal processing stations will not completely ruin the market for smugglers, but I believe it would take a big chunk out of it. But all of this is just guesswork.

What I do know is that we have go to do better than we’re doing. The propaganda of fear and the numbing cruelty need to be pushed aside, the political machine has got to get off dead center. We owe real human beings much better than we’re doing right now. The last time someone attempted to do anything measurable, in my memory, was George W. Bush, and he got stonewalled by his own party. As Americans, we have the creativity and we have the heart to solve this. Why we would meet the idea of individuals desperate to breathe the free air of America in any other way than helping them in that quest, I will never know.

Whenever this immigration debate heats up, I can’t help but think of my own family’s story. Not a lot is known about Thomas Sullivan of County Cork, Ireland. The story passed down is that he was brought here as a child of 4-6 years old, accompanied only by his uncle Jerry, arriving on the shore of Manhattan some year from 1808-1810. There was no “line.” No one even counted ship passengers back then. They just walked into America.

We’re not sure of that part of the story. What we do know is Thomas was not raised by his own family. Uncle Jerry exited the picture for unknown reasons. Thomas was raised by the Holcombs of Champion, New York. They raised him to be a farmer and that’s what he became, establishing a dairy farm in Edwards, New York, that lasted four generations until my Uncle Dick sold off the last of the cows in the 1970’s. My family’s story is one of both American charity and fruitful labor. Same as millions of others. And it will be the story of millions more.

America does not need a wall; it needs a new Ellis Island. It won’t be easy. We must be at once open-handed and vigilant. Eager to serve, to sacrifice to welcome, but also careful to preserve the very union that draws so many hopeful souls in the first place. It will be difficult, but we are capable. This is America. Immigration is our history. Immigration will be our future.