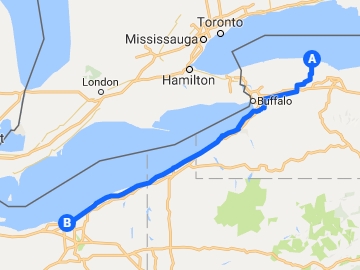 In the fall of 2011, against my better judgment and with no prior experience, I attempted to ride a motorcycle from a dairy farm in Upstate New York back to my home in Dallas, Texas. This is the long-winded account of that trip in easy-to-digest line segments. For earlier portions, go here: Part 1 Part 2

The morning air was cold and dewy, just as all camp mornings should be. I dressed, dropped my feet into untied boots and wandered to the shore for one look at Lake Ontario up close. The sun just peaked over the morning fog to my right. Not too far in front of me, though miles out of site, someone was having the inverse experience in Toronto.

I stopped in Brockport for breakfast, next to one of those tranquil, white clapboard churches. I feel obligated to order corned beef hash and eggs when I’m near the rust belt. Something about runny eggs and pickled beef from a can enables my fetishistic theft of working class experience. Only a desk-sitter romanticizes these sorts of things.

I cut East toward Buffalo, but circumnavigated the city to avoid traffic. I’ll probably regret this in the long term since Buffalo is one of my intended stops on the hot dog tour of America. After I skirted the city, I turned onto New York’s highway 5 and for the next 175 miles, the blue expanse of Lake Erie stood at my right.

I realized the first day that I could only take about an hour of riding at a time, so I took a gamble on a historic landmark in Dunkirk. It was an old lighthouse conjoined to a Victorian, red-brick home for the lighthouse keeper and his family. I was the lone tourist, but the woman at the front desk led me on a tour anyway. As I scrutinized the house’s military memorabilia from wars and conflicts past, my guide told me about her son, who had been to Iraq and returned unscathed. I thought, “This is where our soldiers come from: Dunkirk and a thousand other towns I will never get to visit.”

I spiraled up the lighthouse toward that stout Fresnel lens at the top. The historic keeper, a soldier, had to keep close tabs on the light and the upkeep of the tower. His bedroom door ran straight into the tower’s staircase. It is one of those obsolete vocations I irrationally mourn. I imagine society had a richer appreciation of what it meant to live corporeally when every task added an extra degree of difficulty. But buildings like that lighthouse don’t need live-in care anymore, just a Coast Guard guy to come check on it every month.

My aim for that evening was Cleveland. The ride was a cinch. I could not have ordered up better weather: highs just below 70 degrees, dry and sunny. The beauty of Lake Erie rode sidecar all day and I was staying in a motel that night. For some reason, I have always loved motels and that strange odor they have, both sterile and familiar. The smell I adore is probably the dander of five thousand guests.

I wanted to visit Cleveland specifically, because only three months earlier, my Dallas Mavericks defeated what seemed like an undefeatable Miami Heat team, exorcising five-year-old demons and celebrating the achievement on Miami hardwood. Along the way, the Dallas Mavericks picked up some fans in Cleveland, the city LeBron James ditched in a self-gratifying one-hour TV special. They called themselves Cavericks, Mavaliers, or simply Cavs for Mavs, adopted children of the little Mavericks facing the best one-two punch in the NBA since Kobe and Shaq.

I had located a few bars that were featured in stories during July of 2010, the month when LeBron made his decision to sign with Miami as a free agent instead of Cleveland. Broadcasts showed one of these bars, the Winking Lizard, at the moment James spoke the now famous words “I’m going to take my talents to South Beach.” Cameras showed a middle-aged Clevelander, mouth agape. It was a palpable sports moment in a city accustomed to fifty years of professional sports mediocrity.

Cleveland is a real city, a manufacturing city, a railroad city, a river city. Cleveland is made of iron, not the cheap throwaway stuff. Cleveland may suffer rust and dents, even for decades. But Cleveland is one of those places you always suspect will still be standing regardless of what buffets it. I think it’s one of the sturdiest places in the United States, with sturdy sports fans.

I rode over to the Winking Lizard for dinner, but couldn’t find anyone that looked ready to engage in delicate sports talk. I brought along my Nowitzki jersey, but chickened before I left my room. I had never met a bona-fide Cleveland fan and wasn’t sure what would trigger one in the wrong direction. Getting heartbroken fans to talk about how great my team did seemed a poor and selfish plan in retrospect. I ate my wings in mostly silence and left.

I decided to visit one more bar, Harry Buffalo, which seemed to draw a better midweek crowd. As I sidled up to the bar, I spotted a crowd of fellow yuppies to my left. All I had to do was mention I lived in Dallas and they lit up. The Cavericks were no myth. They described in rueful detail the fall from hope to bitterness as LeBron James announced his exit. The whipping post of a city just felt whipped again, their vested hope in King James reduced to a penny stock. For one unrepeatable playoff run, the sturdiest of sports fans adopted Dirk Nowitzki as their German avenger and reaped some ounce of vicarious satisfaction in the end. I left the bar happy at the unlikely camaraderie of a Dallasite and three Clevelanders, wondering how much longer they would be left to wander the ring-less wilderness.

One thought on “Road Rookie: A Dilettante’s Journey from New York to Dallas – Pt. III: Cleveland”