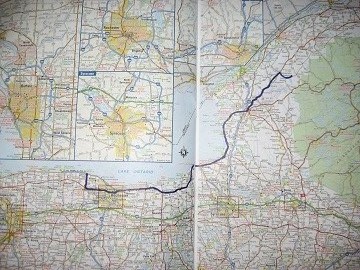 In the fall of 2011, against my better judgment and with no prior experience, I attempted to ride a motorcycle from a dairy farm in Upstate New York back to my home in Dallas, Texas. This is the long-winded account of that trip in easy-to-digest line segments. For earlier portions, go here: part 1

Uncle Dick and I woke at the same time. I made breakfast for both of us: a few eggs, bacon and toast with margarine. How a veteran dairy farmer ever permitted himself to buy margarine, I will never know. As we sipped weak coffee, Uncle Dick asked me a few questions about the trip, how long it would take, what kind of route I had planned. I was hoping for a kind of folksy confidence from him, but with every question, he would pause to look up at me with a paternal worry. There is nothing quite as sobering as having your dread validated. Meanwhile, the motorcycle I still had not seen sat in the adjacent shed.

After breakfast, I walked into the shed and threw the tarp off what was now my motorcycle. Tiny rust pits dotted the chrome along the handlebars and exhaust pipe, but the bike looked in otherwise good shape. I also cut open the box my dad had sent ahead of me. He shipped me a pair of saddlebags, a sleeping bag, some bungee cords and a rain suit. I didn’t dare start the bike or even climb on it yet. I was targeting a noon departure and we still had to sort out the vehicle’s paperwork at the DMV.

Uncle Dick and I drove into Gouverneur where I was given a clinic in New York title transfers. There was some debate on whether I would need to pay tax for the purchase back in Dallas. Although I was paying him for the motorcycle, Uncle Dick wrote a note in ballpoint pen stating that it was a gift and then he signed it. Hand-written notes, I was sure, held little water back in Dallas, but I was game if it helped me avoid a couple hundred dollars. Once I completed the paperwork, the bespectacled woman at the main desk handed me a transit permit. Uncle Dick had already removed the license plate and this permit was the only proof that I had not stolen the motorcycle. “What am I supposed to do with this,” I asked. “Keep it in my pocket?” “I guess so,” she said.

As we drove back, I could feel zero hour approaching. I was going to have to ride the bike on the street, share the road with other drivers, navigate curves without flying off into an embankment. Uncle Dick said the bike needed gas and that I ought to ride it to Fowler to fill it up. I put on the crash-padded jacket I bought in Dallas, my helmet and my gloves. I swung my right leg over the bike and backed it out of the ramshackle farm shed. Brake, clutch, kill switch, starter, and the motorcycle popped to life. I had about fifty yards of downhill gravel in front of me, which I coasted through before pausing with my front wheel nudging the highway’s asphalt.

There is no way of adequately describing the combination of ecstasy and terror that followed. To get the sensation yourself, you will need to forego riding a motorcycle until your early thirties, take a two day riding course in a parking lot during which you never top 25 mph, fly to New York to buy a motorcycle sight unseen, and throttle that motorcycle onto the road for the very first time. I was going about 45 mph and felt like I was breaking a land speed record. It was the longest four miles I would do all day. The bike was steady and there was air wheezing across my face-shield. Then, a motorcycle approached from the opposite lane. The rider extended his left hand down and out from the handlebars to wave. Not even two miles into motorcycling and an anonymous rider welcomed me to the league.

I survived my first eight miles and was back at the farm, loading my bike up, trying to stuff my few shirts, running shoes, sleeping bag and sundries into the small saddlebags. I set my atlas, rain suit, tent and a Hemmingway novel that would remain unread on the back seat and secured them with a bungee net. Conspicuously absent from my luggage was a Canon 35mm camera, which was still sitting on my bed in Dallas. Consequently, there are no pictures of the trip, only my scattered memories and whatever warped images they conjure.

It was nearly one o’clock in the afternoon. My bike was packed up and I was ready to leave. Uncle Dick and I stood outside, struggling to find an acceptable way for two men who express very little to say goodbye. He still had that quiet, worried look on his face. I couldn’t make out whether it was the simple sadness of a goodbye or the more specific worry that I might tip this motorcycle on top of myself the way he had done a year earlier, before he stopped riding altogether. We gave each other the family-patented side-hug and I rolled the bike down the driveway and started west.

My plan was to ride about 250 miles a day for seven days and, all under daylight. I wanted to avoid the dark and give myself a chance to see the sights. I was also riding a 650CC, single cylinder bike, which has a way of making you feel like a milkshake if you sit on it too long. I was pushing it, leaving so late in the day. My goal was to reach Hamlin Beach State Park, just outside of Rochester.

I had a wad of spearmint gum in my mouth and chewed it with enough nervous pressure to make a diamond. I was tentative enough just getting the motorcycle up to 45 mph and now the empty highways of Upstate New York were asking me to please go 55. The fear was always the curves. Beyond the fact that you have to lean toward the ground to make any turn, the physics of centrifugal force demand that you nudge the handlebars in the opposite direction of the turn. This puts you into a lean and you complete the curve neatly as you accelerate through it. The ass-backwards logic intimidated me and I had visions of drifting off the road or into a car.

Well on my way to Watertown, I was cautiously maneuvering on a two-lane highway, cruising at around 50 mph. The sun was blinding me through my face-shield. Book, camera, and now sunglasses among forgotten items. I stopped at a convenience store and bought the cheapest pair of redneck sunglasses I could find. I had ridden about 30 miles already and was just getting comfortable with the speedometer topping 55. I knew if I didn’t get the hang of riding faster, I was going to be traveling in the dark or getting to Dallas days later than I planned.

I wound my way through Watertown, where I stopped for pizza, and then encountered Lake Ontario at Henderson Bay. The world opened up on my right, miles of blue. Connecticut, Delaware and Rhode Island would all fit inside Lake Ontario and still it is the smallest of the five Great Lakes. It is an alien region up there, where callous-skinned Americans speak with canuckish, drawn out “O”s. Freight like iron ore and potash for fertilizer is still hauled across the water on behemoth lake ships, but diesel trucks and multi-lane highways have pulled down those numbers. It was over 50 miles across from me to Canada in some places and I could not see beyond the enormous blanket of fresh water.

I left the lake at Mexico Point and returned to it again at Oswego before angling down highway 104 toward Rochester. The town’s name reminded me of a river pouring out of New York’s Adirondack Mountains called Oswegatchie. It ran alongside the family farm between Gouverneur and Edwards. My dad used to make some terrible joke about an Indian and a runaway horse that ended with the Indian finding his animal and declaring “Os, we gotch ye!” I spent the next twenty minutes chewing gum and trying to remember the joke before deciding it was probably too dumb and too racist to bother recalling.

As I entered Rochester, highway 104 broadened into a four-lane urban expressway. I stayed to my lane, speeding up to keep pace with traffic. I didn’t dare weave in and out of cars, hop-scotching down the road the way I’ve seen other motorcyclists do. I thought of someone merging into me, so I pulled tight up against driver’s side windows and into their sight.

After pausing in a shopping strip parking lot to get my bearings, I made a hard right to the North and toward Hamlin Beach State Park on the bank of Lake Ontario. I could see the horizon start to open up again against the sky as I ambled up a country road. There was no one at the front gate of the park, so I breezed past the guard house and idled through the curvy path running along the camp sites. I found a small one, sufficient for one-person, and turned my motorcycle into the gravel parking space.

Neutral, kill switch, kick stand. The bike was quiet except for the tings the exhaust pipe made as it cooled down in the dusky evening air. I took account of myself: two arms, two legs, no broken bones and over 200 miles in my rear view. I was indeed able to ride a motorcycle. No more wincing at every curve or screaming inside my helmet as I accelerated above 60. The rest of the trip was going to be fun. I set up the tent and rode back into town for some food. On the return trip, I became acquainted with the reserve gas tank switch, an important feature on a vehicle with no gas meter.

At day’s end, I lay in my sleeping bag, staring up through nylon mesh into the night sky. New muscles ached from the posture I held all day and the regular vibrato of the engine that ran through my body. I slept soundly and easily.